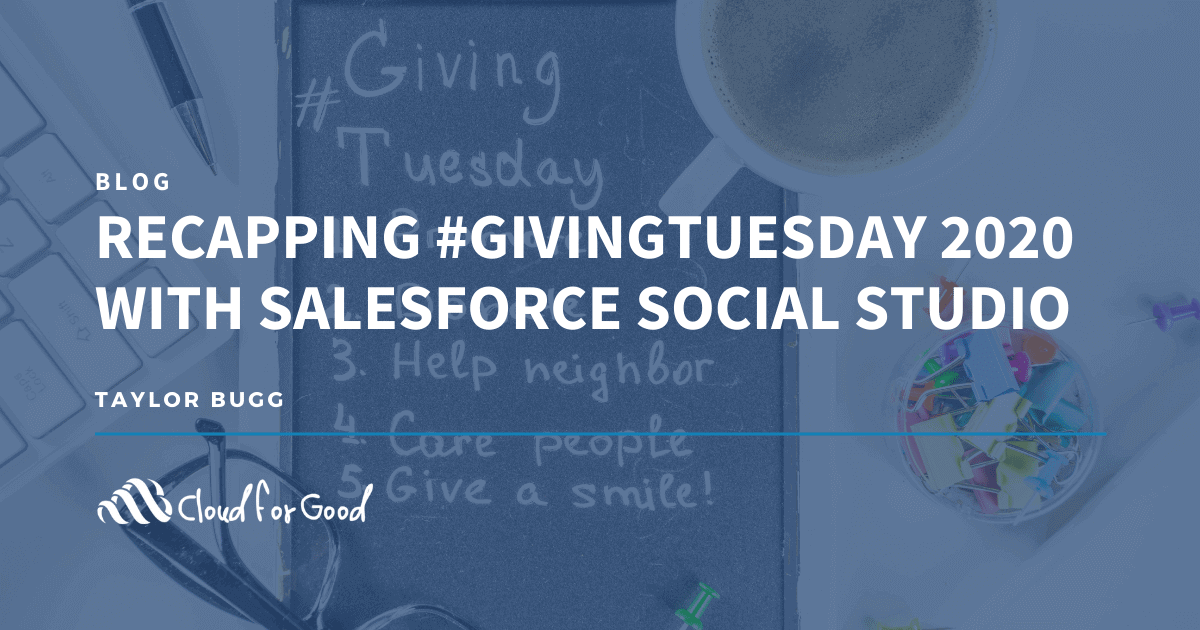 Giving Tuesday, a globally recognized day of giving, falls on the first Tuesday after Thanksgiving. In 2020, the day fell on December 1, and people around the world came together for a record-setting 8th annual global day of giving. Since Giving Tuesday’s inception in 2012, nonprofit organizations and higher education institutions worldwide have adopted the annual day of giving and hosted fundraisers and other events to support the movement. However, this year’s Giving Tuesday events looked a little different than that of years past – this year, the campaign was entirely virtual. Though many organizations were unable to have their annual in-person celebrations and fundraising events, the move to virtual events enabled them to further their reach and communicate with even more donors and supporters. Our partner, Classy, tracked donations on this record-setting day of giving, reporting that more than $37.9M funds were raised across over 9,000 active campaigns.

Joining the Conversation on #GivingTuesday

Because the Giving Tuesday movement was entirely virtual, I decided to track the day’s social insights using Salesforce Social Studio. In the week leading up to Giving Tuesday, over 146 thousand conversations surrounding the topic occurred online, most of which took place on Twitter. Social Studio also pulled some of the top words from the week leading up to December 1. I love seeing encouraging words such as “giving,” “donate,” “community,” “generosity,” “impact,” and more that reflect the spirit of the day. Take a peek at the figure below for a closer look at these insights. On Tuesday, December 1, conversations rose dramatically to over 432 thousand posts collectively started across Twitter, Facebook, YouTube, and other networks. Based on the Volume Trend feature within Salesforce Social Studio, I was able to identify the peak conversation times. As shown in the figure below, conversations began picking up around 3:00 am ET, reaching a peak at 10:00 am ET. The conversations then steadily declined as the day progressed, ending out the day with just under 7,000 new posts. Additionally, using the tools within Social Studio, I was able to identify that nearly all of the conversations were occurring on Twitter (see the figure below for a closer look). Looking a bit closer at demographics, 60.8% of the total conversations were happening in the United States, accounting for more than 262.8 thousand posts. However, discussions surrounding Giving Tuesday were occurring all over the world. See the figure below for a list of the countries with the highest post volume. As displayed in the figure above, Giving Tuesday is truly a global phenomenon. After gathering all of these metrics, I was interested to see how the conversation continued in the two days following Giving Tuesday. Here is what I found:

From December 2 to December 3, the post volume dropped a significant 90%, totaling 50 thousand conversations across the various social platforms. However, as seen in the findings above, nearly all of the posts were held on Twitter. While scrolling through the Feed section within the Social Listening Summary, I was able to see that many of the recent posts were from organizations and institutions who were thanking their donors, supporters, and all others who participated in their individual Giving Tuesday campaigns. Additionally, the top words collected from these posts reflected the “thank you” message, as shown in the figure below. These are only a few of the incredible features that are included with Salesforce Social Studio. With the platform, your marketing and content team can also publish posts, engage with your followers, track metrics, and so much more! While this social listening dashboard is specific to Giving Tuesday, users can also set up dashboards to follow your brand, initiatives, social trends, and hashtags more efficiently and effectively than ever before.

How did your conversations on Giving Tuesday compare? Let us know in the comments.

You May Also Enjoy: Menu
PrevPreviousSalesforce Announces Retirement of NGO Connect & Why You Should Be Excited
NextUsing Marketing Cloud as a Lead Funnel Tool, Part 1Next